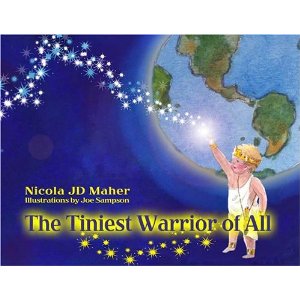 This book should be compulsory reading for all parents who are fortunate (or unfortunate) enough to have their baby in a pediatric NICU.”
Dr. Sigmund H. Ein, BA, MDCM, FRCS(C), FAAP, FACS, Honorary Staff Surgeon, The Hospital For Sick Children, Toronto

When a healthy baby is born, everyone is quick to share in the celebration. When something goes wrong however, it can be hard to find words.

‘The Tiniest Warrior of All’ charts the epic battle of a premature baby sent on a quest to find her true home. When her time-machine crashes, she is cared for by a cast of wizards, sorcerers and bodyguards, all of whom help her to fulfil her destiny.

This beautiful picture book is intended for the families of premature babies. It explains the Neonatal Intensive Care Unit environment in an honest yet gentle way. In the world of the Tiny Warrior, babies who sustain injuries during their battle are honoured as champions. The children who don’t win their struggles are also commemorated for their bravery, thus providing a tool to help deal with bereavement.

Miracles do happen.
The books author, Nicola JD Maher was born and raised near London, England. She and Her husband John, along with their twin children Henry and Lydia, moved to Mississauga, Ontario in 1999. Their own tiny warrior named Imogen was born in Toronto’s Women’s College Hospital in 2003. She weighed only 1 lb 8 oz at birth and spent nearly four months in a Neonatal Intensive Care Unit. During this time she made a couple of trips to the Hospital for Sick Children in Toronto, survived the SARS outbreak and gave Winsome, her primary care nurse, a very hard time.